Microsoft’s Surprise Windows 11 Announcement - What You Need to Know

Windows 10 was supposed to be the last new version of the Windows operating system as a standalone piece of software. However, the company has now announced Windows 11, extending the life of the world’s most popular computing platform. Here is what you need to know about this surprise release.

The Windows 11 interface has an updated, cleaner and more modern design. The Start menu is in the center of the screen and has a more Apple-esque look and feel than previous versions. The new release will be more flexible and customizable that the traditional Windows interface. I really like the snap layouts which will let users choose different layouts from a single screen. Office 365 users will be able to log in with their 365 subscription, and recent documents will appear automatically in this center panel with pinned applications.

If you are a Microsoft Teams user like me, it is exciting to see that Teams will be embedded into the new operating system, and not a separate application. In fact, there have been indications that Teams will be able to integrate with SMS communications so you can connect with people on their phones, regardless of the platform.

THE RUBBER HITS THE ROAD

Where things get interesting is the announcement that Android apps will be available in the Microsoft Store. 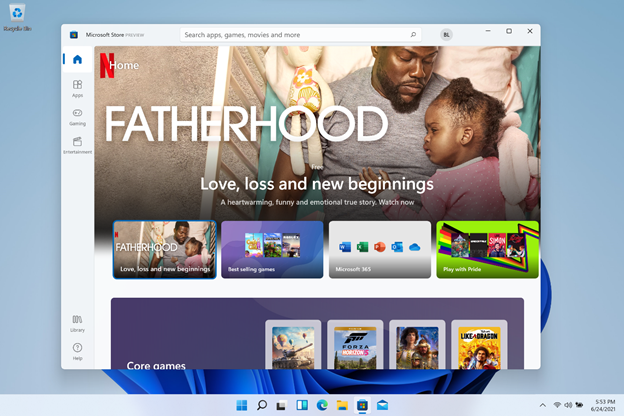 While this might just seem like a cool option to have, it signals one of the reasons why Windows 11 will be a major release and not just an update to Windows 10. It indicates some major work under the hood to make Android and Linux applications native inside Windows 11. Gamers will also enjoy the pending upgrades to the Microsoft gaming store, with widgets and a mobile-friendly look and feel.

WILL IT HELP ME GET WORK DONE?

So, what does this all mean to business users? The most important aspect of Windows 11 will be that it allows you to have a business desktop, a personal desktop and gaming desktop all on the same machine. During COVID, people increasingly used the same computer for all three phases of their lives, which can be bad for productivity and security. This release will help people slip back and forth between the different functions while keeping their files and applications organized.

It is especially interesting to hear Microsoft promise that Windows updates should be smaller for Windows 11. The size of updates has been something of a problem for more recent Windows releases, especially if you have computers that aren’t used much or didn’t have the time or bandwidth to download and install massive updates.

The business versions will be part of Office 365 so if you are a subscriber you will get the features and improvements described above. Microsoft also claims that Windows 10-compatible hardware will work with Windows 11. In fact, they claim Windows 11 will be faster, which will be interesting to see, since that hasn’t always been true for past releases. You can find more information about hardware compatibility from this Microsoft blog post.

The official end date for Windows 10 is October of 2025. Since 1.3 billion people use Windows every day, this Windows 11 announcement is a big deal with serious implications. Early versions will be out soon and Elevity will investigate compatibility and provide updates to our users. If you would like to investigate Office 365 or want to upgrade your office technology, reach out to the technology management experts at Elevity.

Previous Story
← AWS vs. Azure vs. Google: Which One Puts You on Cloud 9?
Next Story
The 5 Best Cybersecurity Risk Assessment Tools →